California’s 2020 Energy Blackouts: Resource Adequacy May Not Have Failed, But Is It Working?

California’s 2020 Energy Blackouts: Resource Adequacy May Not Have Failed, But Is It Working?

In August a record-setting heat wave spanned the western United States causing enough stress on California’s grid to trigger blackouts. The circumstances leading to these events have been widely reported, including: a handful of gas-fired power plants that unexpectedly went off-line; extreme heat across the region, leading to a lack of available imports; and new capacity that is in the pipeline, but not yet online. While those circumstances are critical to understanding these particular events, it’s far from clear they get at the root of the problem.

Underlying these outages is a paradox: California “kept the lights on” when demand was at its peak at nearly 5:00pm on August 14, the first day of the August blackouts, but was forced to commence rolling blackouts just after 6:30pm. The lights actually went off after the greatest risk anticipated by California’s current Resource Adequacy had passed.

To understand why we need to understand how California’s regulatory framework for ensuring reliability, Resource Adequacy, is structured. Did it fail to work as designed? If not, why were there blackouts? Does the program’s design still meet California’s needs or is it solving for the wrong problem?

There are two basic premises of today’s Resource Adequacy program.  First, it assumes that if the energy system can satisfy the maximum peak of customer demand each month, it can meet any lesser demand.  Second, as the California Public Utilities Commission has often stated since the program was first established, “reliability at any cost is not a policy option.” In practice, the latter criterion translates to planning to meet customer needs under most conditions, but to “shed load” under more extreme conditions — the polite electrical engineering term for rolling blackouts.

As the extreme August weather began, it became clear that the ability to provide energy arranged through the Resource Adequacy program would fall short.  This CAISO diagram, showing the projected supply and demand for August 17, illustrates the sizable gap. 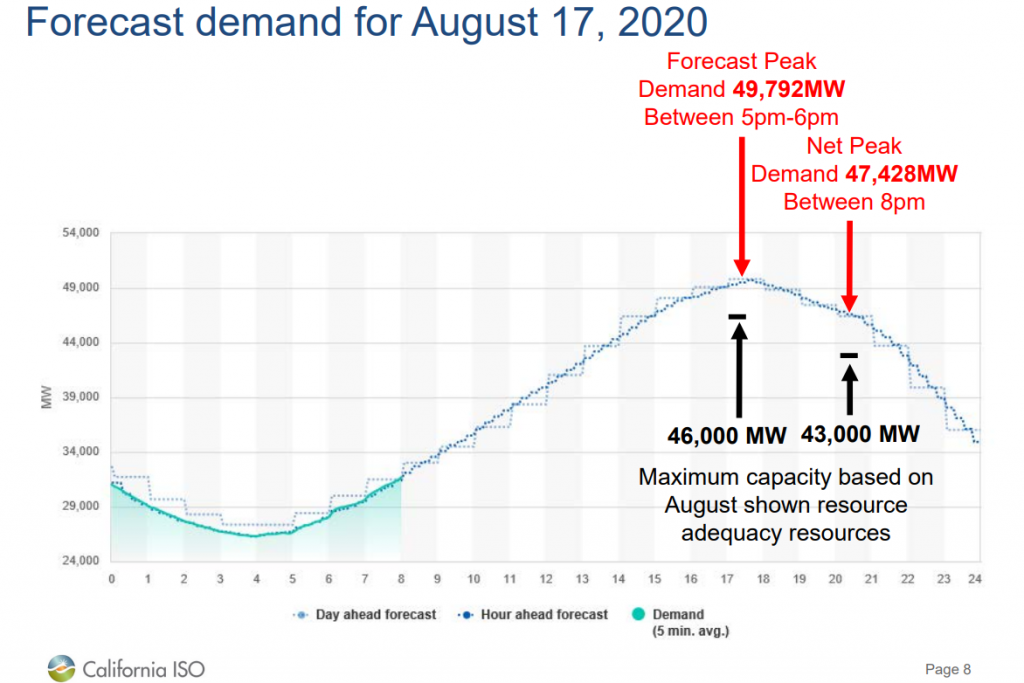 It should not be a surprise that a shortfall might arise under some extreme conditions;  after all, Resource Adequacy was never intended to “keep the lights on” under any circumstances.  Thanks in large part to renewables, which performed better than the Resource Adequacy program projected, and to extraordinary customer actions to reduce consumption, California met the peak of customer demand. In other words, Resource Adequacy arguably performed better than expected at what it was actually designed to do, i.e., serve load at what had been anticipated as the moment of greatest risk.

Question #2:  If California Met Peak Demand, Why Were There Blackouts?

To answer this question, it’s worth spending a little more time on how Resource Adequacy currently works.  Essentially, Resource Adequacy stacks up capacity (i.e., the individual capability of each resource to provide energy) against the maximum projected customer demand for each month, plus a safety margin (the “Planning Reserve Margin”).

Even at the beginning of the program, it was clear that no resource can provide its maximum output all the time, and so adjustments were made, the amount of capacity that counted towards Resource Adequacy from each resource was limited to reflect estimates of its likely availability (referred to as “de-rating” its capacity).  Over time, additional adjustments were made to try to reflect operational constraints, including limits on how much capacity can count from certain resource categories (for example, gas-fired plants with air emission permits that restrict the number of hours they can operate), and the addition of some new requirements to meet particular grid needs.

Unfortunately, stacking adjusted capacity amounts against peak demand just doesn’t tell us very much about whether the system has adequate resources at other times.  This past August, solar and wind performed very well at peak, putting the lie to those who claim that renewables caused the crisis.  It was only when the sun went down, and wind hadn’t had a chance to come up to full production, that a gap sufficient to trigger rolling blackouts emerged between supply and demand.  As CAISO’s August 17 figure shows, the shortfall between expected ability to produce power and projected consumption was greater — by almost 650 MW, the amount of a very large utility-scale power plant — after the demand peak.

Concern about this type of gap, often referred to as the “net peak,” has been growing over the last decade.  The following diagram illustrates the customer energy demand curve, and the steep changes in energy supply that are required as wind and solar energy increase and decrease production. 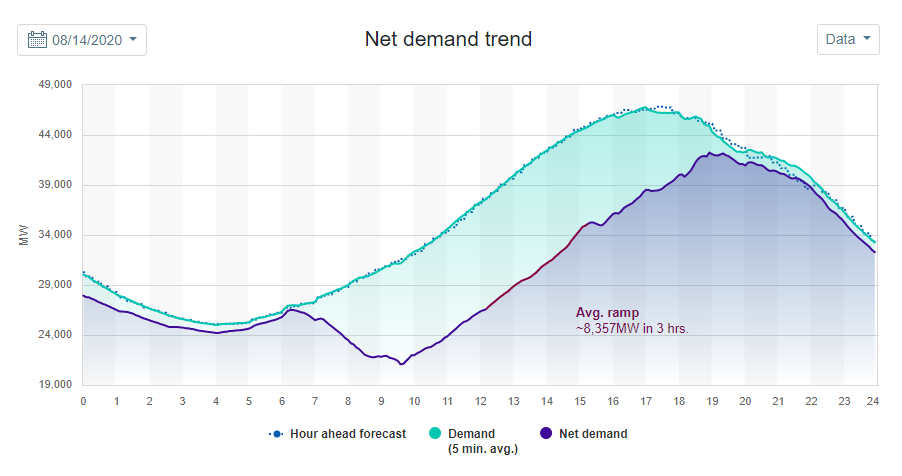 Looking at the August events, two conclusions stand out:

Since August’s blackouts occurred at the “net peak,” would reliability be ensured by making it the target, instead of the absolute peak of customer demand?  A deeper look suggests more fundamental problems are at issue.

Stacking discounted capacity against a single peak, whether the absolute or “net” peak, gets ensuring reliability wrong in at least four ways:

Question #4:  If Stacking Capacity Against Peak Isn’t the Answer, What is?

It’s clear that Resource Adequacy needs to be reevaluated, beginning with an inquiry into these questions. A number of approaches have been suggested, including:

A forum for thoughtfully considering these and other creative alternatives is needed. Fortunately, even before August’s blackouts, both the CPUC and the California Independent System Operator (CAISO) had begun initiatives to reevaluate how to assure reliability as the nature of the energy system, and of the challenges facing it, are changing.

Gridworks will contribute to their efforts. We are launching an initiative to help market leaders discuss current and future challenges, evaluate the merits of different approaches, and build consensus around working alternatives. These alternatives will benefit policy-makers as they navigate their critical decision-making. Our ultimate aim is to design and promote a suitable capacity market for California’s clean energy future. To receive periodic updates, subscribe to email newsletters and follow us on LinkedIn.